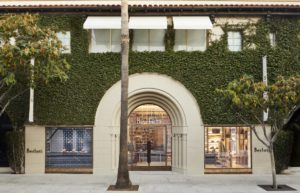 Berluti, the Parisian shoemaker founded in 1895, has opened its first Los Angeles flagship in Beverly Hills. The choice of Los Angeles for the expansion of the iconic heritage brand was a natural. Much like Paris in the late-nineteenth century, Los Angeles is a city poised at a critical juncture between the past and the future.

KRITON Electronics, Bowers Construction and SAMAP are the companies that have worked with Berluti on this project.